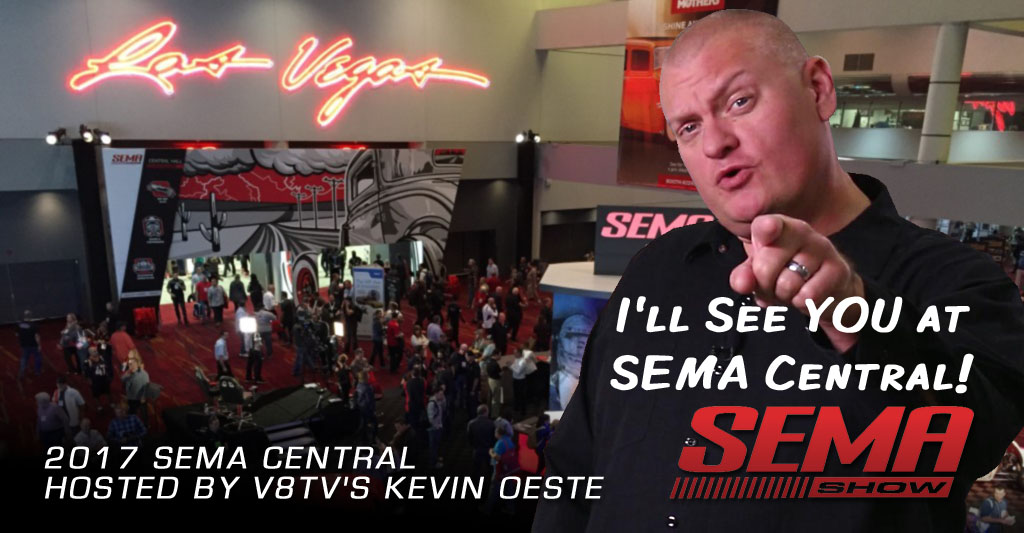 The 2017 SEMA show kicks off on October 31, and this year, the SEMA Central stage will be hosted by V8TV's own Kevin Oeste.   SEMA Central is located in the Grand Lobby of the Las Vegas Convention Center, just outside the Central Hall.  SEMA Central is the main hub for special SEMA programs, displays and announcements, and it's a place to for show goers to learn about business growth and opportunities offered through SEMA's many benefits and services.    The live stage features interviews with key SEMA committee members, manufacturers, celebrities, SEMA Hall Of Fame inductees, Battle Of The Builders participants, and more.

"This is a great opportunity to spend time chatting with some of the most involved members of the SEMA organization and leaders from all areas of the industry" Oeste remarked.  "Being entrusted by SEMA to host the SEMA Central stage all week is a tremendous honor, and after attending the SEMA show for over 20 years,  I'm very excited to be a part of the show from the SEMA side of things.    We'll still have V8TV crews covering the event for our V8TV television show from the show floor, but I look forward to a fun week in the Grand Lobby with SEMA Central."

SEMA Central interviews are all recorded and will be shared on the SEMA YouTube channel shortly after the show.    V8TV will be airing coverage of the SEMA show in future episodes airing on TUFF TV, Rev'n, The Action Channel, and streaming on Roku, YouTube, and V8TV social sites.