The Complete Book of Camaro: Every Model Since 1967 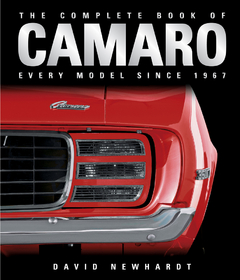 The Complete Book of Camaro

This is a Camaro book like no other. The Complete Book of Camaro covers the entire production history of Chevrolet’s iconic pony car, from the original concept car, code-named Panther, to the latest and greatest fifth-generation sensation. The Complete Book of Camaro showcases in photos, text, and technical specifications every model since 1967. If Chevrolet built it, it is here.

This lavishly illustrated book details all five generations of the Camaro’s production run: the original models developed to fight the Mustang in the pony car wars of the late 1960s; the second-generation cars that became icons of American automotive styling in the 1970s; the third-gen cars that helped to lead the muscle car renaissance of the 1980s; the refined fourth-generation models that continued to demonstrate GM’s engineering prowess through the 1990s; and finally, the blockbuster new fifth-generation Camaro that has taken the world by storm. In addition to the production vehicles, prototypes, show cars, anniversary editions, and pace cars are all covered. With extensive details, specifications, hundreds of photographs, and a trick book cover featuring an RS-model headlight door that slides open when the book is opened, The Complete Book of Camaro is the ultimate resource on Chevrolet’s legendary pony car.