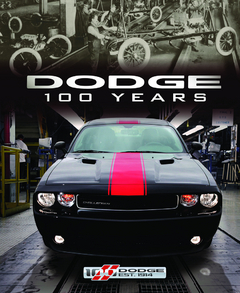 The year was 1900 when Horace and John Dodge founded the Dodge Brothers Company, in a machine shop in Detroit, Michigan. The high-quality components they produced advanced the dawn of the American automotive industry, appearing in the famous Curved Dash Olds and Henry Ford's Model A. Soon, the brothers became the exclusive supplier to Ford, a position they would hold for over a decade before breaking out on their own in 1913 to produce their first car a year later. In Dodge 100 Years, renowned automotive journalist Matt DeLorenzo provides an unrivaled chronicle of Dodge throughout the past century. Starting with the company's modest beginnings in the 1900s, DeLorenzo recounts the brothers' story from their decision to venture into full automotive manufacturing, to their untimely deaths in 1920, and finally the company's purchase by Chrysler in 1928.