Great reminder from our friends at AutoRestoMod - Get a fire extinguisher! 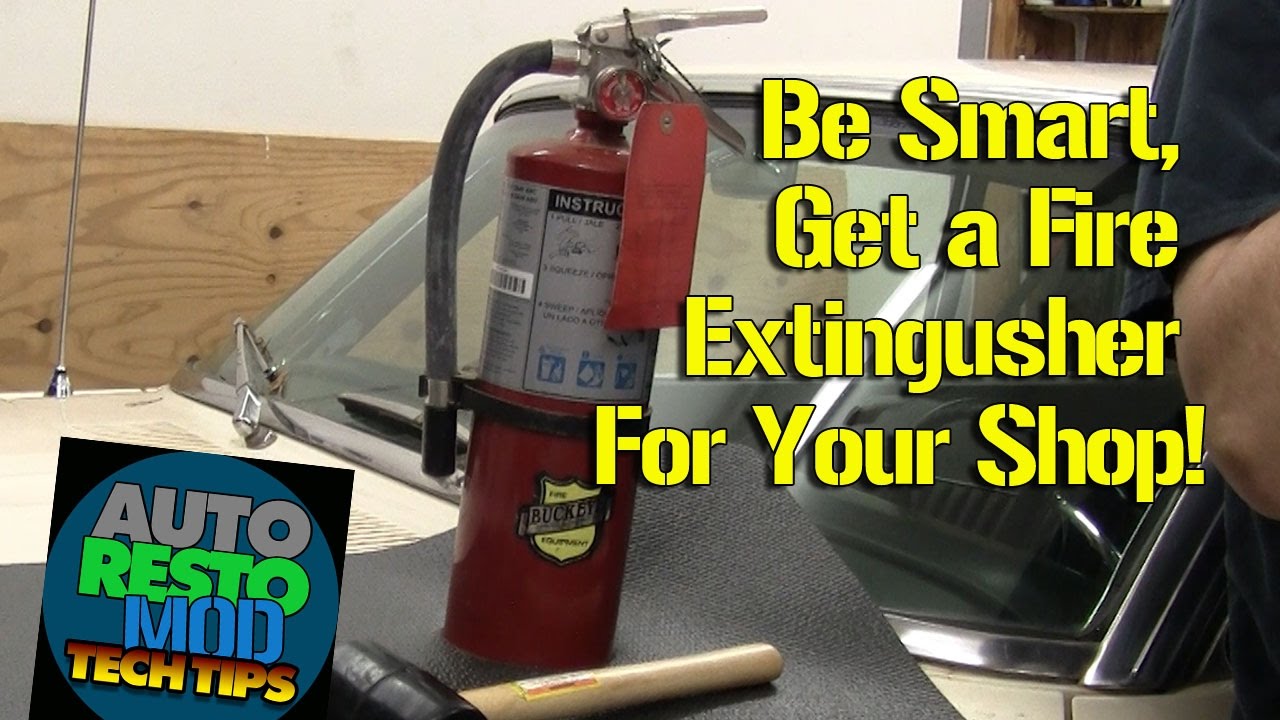 Our friend Jeff Ford has TONS of great info on www.autorestomod.com, and this week, his tech tip is one we can all use... make sure you have plenty of working fire extinguishers in your shop, garage, and car!     Don't forget to subscribe to their YouTube channel, they've got lots to share about performance, restoration, and other cool car-enthusiast stuff.

Polish Like A Pro With An Eastwood Buffer Video

Polishing parts can be very rewarding if you know how to do it and have the right gear. We picked up an Eastwood buffing motor, stand, and polishing kit to be able to do this kind of work in-house. We learned that there are a variety of different kinds of buffing and polishing wheels, and the various compounds can only be used with one wheel. Here's some tricks to help your polishing projects go smoothly.

We're beginning the bodywork on our 1971 Olds project, and we're trying to save all the original steel if possible. This time, we're patching the lower fenders, as these cars - all GM "A" bodies in general - seem to have rusty holes in their fender bottoms. The design allowed them to hold leaves, pine needles, and dirt at the bottom of the fenders, and this debris eventualy rusted them from the inside out. We obtained some patches from YearOne, and today we're cutting out the old and installing the new. We fabricated new supports to replace the rusty backside braces to keep the rust away for good.

Bare steel bodies are cool to look at, but it's time to start the bodywork phase on the S71 Olds. This time, we sprayed the underside of the car with PPG DCX 1791 etch primer and then DP90 epoxy primer. Our painter Randy uses SATA spray guns and 3M safety masks and gloves with this stuff. DP90 is black and tough, so it will form the base on the bottom of the car body. The next step is to brew up some DP60 - a blue version of the same stuff - to shoot the inside and outside of the body. Then the filler work begins!

Media blasting removes all the old paint and rust, and also most of the original seam sealer. After we picked out the remaining old caulk, Randy masked the bottom of the S71 and brushed in a 3M body seam sealer to reseal the panels.

We had our 1965 Chevelle SS frame media blasted and stripped clean, and then it was time to give it a new protective coating. This time, we utilized the new Extreme Chassis Black Epoxy paint from Eastwood. We found it to have an accurate satin appearance, and it seems to have the guts to stand up to the road.

After spending time reinforcing the GTO's chassis, we shot it with a new paint system from Eastwood. The base started off with their high-build 2-part catalyzed Epoxy Primer, and then we topcoated it with their new Ceramic Chassis Black in the satin finish. We used a 3-gun DeVilbiss Startingline HVLP spray gun set to lay down the chemicals, and the look is outstanding. The Ceramic Chassis Black also has a very high chemical and chip resistance, so the look should last for a long time!

Repairing main floors and trunk floors on our 1965 Chevelle.

Restoring our faded, cracked, and ugly dash pad with the help of Just Dashes.

Our 1965 Chevelle had some pretty nice doors, but they were hiding some rust pinholes that we knew would be problematic later. The last thing we wanted was to finish this car and have it start bubbling with rust spots, so we elected to do the right thing and replace the door skins. This allowed us to not only have fresh, crisp, new OPGI skins, but also to sandblast and epoxy paint the inner structures to make sure they didn't rust again. In this installment, we show the tricks to proper doorskin removal. The next chapter will show the install procedure.

In this video, we install a new set of doorskins on our 1965 Chevelle. These new, rust-free, arrow-straight skins came from OPGI, and when installed properly, are a quick and relatively easy way to renew an old set of doors. We prepped our inner structure by treating it to a complete sandblasting and a bath in PPG DP90 epoxy primer. We then did a little work to the skin to get it ready, then we used a 3M Automix doorskin adhesive to bond the skin to the inner structure. The trickiest part is working the new doorskin over the inner structure, but we used a cool tool from Dent Fix to power the flange over smoothly and quickly.

All the body filler on our 1965 Chevelle project has been block-sanded straight, bringing the car one step closer to paint application. The next step is to apply several coats of Standox Sprayable Polyester .. a high-build sprayable body filler intended to fill any pinholes or sanding scratches in the body filler layer below. Tiny pinholes and sanding scratches can be barely detectable in filler, but they become magnified under the shiny paint and clear coat of final paint, so it's crucial to take whatever steps you can to eliminate them from the car's surface before spraying paint. We applied several coats of the Standox product, which leaves a highly textured surface when hardened, which might appear to be a step backwards in the straightening process. However, most of what you see here will all be block-sanded off, leaving a solid white layer of perfectly smooth substrate ready for the final application of primer before paint. When properly sanded, the poly leaves no traces of pinholes or spreader marks, and it sands smoothly with minimal effort. But you'll see the whole block sanding process in the next chapter of our '65 Chevelle.

Choosing a color for your project can be tricky. Our 1971 Oldsmobile "S71" Project was originally Viking Blue with white stripes, but we wanted to jazz it up a bit with some Warp Speed Blue and Snowstorm White stripes from the DuPont Hot Hues line. In this video, we take an extra fender and spray out a test panel to see how the colors looked. We also wetsand and buff the car using the 3M Trizact Perfect-It system.

The Eastwood Company is constantly bringing new restoration tools and supplies to market, and we learn about some of the latest in this video.