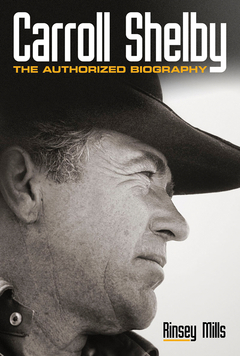 When Ford wanted to add some spice to its newly introduced Mustang pony car, it turned to former racer Carroll Shelby. The resulting cars proved to be the definitive performance Mustangs of the muscle-car era.
The choice made sense. Shelby had proven himself a force to be reckoned with on the racetrack, in the tuning shop, and in the auto industry. By the time Ford hired Shelby to create a racer from its Mustang, the man was already an automotive legend.
Early in his career, Shelby’s accomplishments as a racecar driver included breaking land speed records at Bonneville and winning Le Mans in 1959 with teammate Roy Salvadori. As a team manager, Carroll was part of the FIA World Grand Touring Championship as well as the Ford GT victories at Le Mans.
When his health forced him to give up racing in 1960, Carroll turned his attention to design. He had a vision of a racecar made from a lightweight European chassis with American V-8 power.
The result is what is considered to be perhaps the greatest sports car and one of the fastest road cars ever constructed: the Shelby Cobra. The aluminum-bodied 289 and 427 Cobra models and the subsequent Shelby Mustangs made Shelby a household name in the 1960s.
Shelby continues to impact the world of racing and automobile design. His charisma, vision, and ability to know the best person for the job have made him a master organizer and team leader able to produce consistently impressive results. Even today, Ford’s premier Mustang carries the Shelby name and iconic snake logo.
This book is the complete, authorized biography of Carroll Shelby including images from Shelby's personal collection. It's the story every enthusiast has always wanted to read.

Where To Listen To V8 Radio

We like easy at the V8 Radio Podcast.   To prove it, here are some links to make it easy to find, listen, and subscribe to our show from your favorite podcast source!   Enjoy!